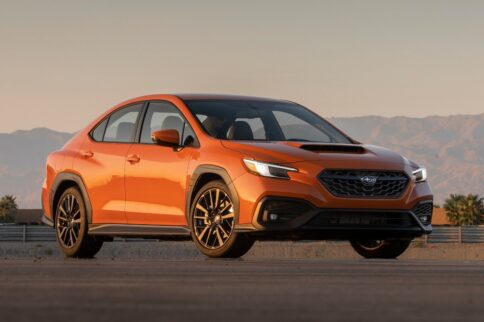 February 2022 brought news of several significant new plug-in models, a redesign for one of Canada’s most desirable sport compact cars, and a brand-new compact SUV with off-road aspirations.

Kia’s latest electric vehicle is the EV6, which promises to be its most driver-centric battery-powered model yet. Meanwhile, Alfa Romeo revealed details of its first-ever plug-in model, the Tonale crossover, which will arrive next year.

And this spring, Subaru and Mazda will have new designs to show off: From the former comes a redesigned WRX sport sedan, while the latter’s latest is the CX-50, a compact crossover built to tackle light off-roading.

That makes the EV6’s underpinnings similar to those of the Hyundai Ioniq 5 and Genesis GV60, but you’d never know it from looking at this swoopy Kia sport wagon.

Kia (and its Hyundai Motor Group parent company) is no stranger to EVs, having offered battery versions of its Soul and Niro for some years now. But the EV6 is a departure for more reasons than its styling. It promises up to 499 km of driving range, 800-volt DC fast-charging capability, and a more engaging drive than Kia’s previous EVs.

The 499-km range estimates applies to a long-range 225-hp, rear-wheel drive model with a 77.4-kWh battery pack. Slotting in below that is a standard-range base model whose 58-kWh battery provides 167 hp and 373 km of range. Also part of the EV6’s initial lineup is a long-range AWD model that adds a front motor and derives 320 hp and 441 km of range from the 77.4-kWh battery. Later in the year, Kia will add a more powerful EV6 GT trim based on the long-range AWD version.

Early next year, Alfa Romeo will welcome the newest member of its North American lineup, the Tonale subcompact crossover.

While it will be positioned below the brand’s existing Stelvio SUV, the Tonale promises to be more relevant in today’s marketplace with an available plug-in hybrid (PHEV) powertrain.

Buyers will also be able to option the Tonale with a conventional 2.0L turbo four-cylinder good for 256 hp and 295 lb-ft of torque. This engine comes with a nine-speed transmission and AWD.

Those buyers who are into NFTs (non-fungible tokens) are in luck, because the Tonale comes with one. This digital certificate will record vehicle maintenance data to provide proof the Tonale has been properly cared for when it comes time to sell it or trade it in.

Alfa Romeo says it will announce the Tonale’s pricing when it arrives in North America in the first quarter of 2023; expect its MSRP to be competitive with those of the Volvo XC40, Mercedes-Benz GLA, BMW X2, and Lexus UX.

This spring, Subaru will roll out the fifth generation of its WRX sport sedan with updated styling wrapped around a new powertrain and more sophisticated electronic interfaces.

To our eyes, the WRX’s new look takes some cues from Subaru’s Crosstrek compact crossover, making us wonder if the company is priming its loyal fanbase for an all-SUV future, even for this sporty four-door.

If the new WRX’s look is controversial, its performance shouldn’t be. All versions use a new 2.4L turbo four-cylinder engine that makes 271 hp and 258 lb-of torque and comes mated to a six-speed manual transmission. As in the old car, the optional transmission is a continuously variable automatic (CVT) that the automaker now calls the Subaru Performance Transmission, or SPT. Subaru says the SPT is a re-engineered CVT that shifts more quickly, pulls off rev-matched downshifts, and is programmed for optimized performance in enthusiastic driving.

Touchscreen infotainment is the high-tech centrepiece of the new WRX’s cabin. The base trim gets a dual 7.0-inch display that handles audio, communications, and HVAC functions. Move up to Sport trim and you get a vertically oriented 11.6-inch screen that can be set to show two types of info at once.

Subaru has priced the 2022 WRX to start at $30,995 — a $1,000 increase compared to the old car — which includes smartphone integration, LED headlights, 17-inch alloy wheels, and heated front sport seats.

Sport and Sport-tech models optioned with the automatic transmission also get the Subaru EyeSight suite of driver assists, a bundle that adds $2,600 to the price of those trims.

Subaru says the new WRX will reach Canadian dealerships in the spring of 2022.

In February, Mazda announced its all-new CX-50 crossover will go on sale in Canada this May at a starting price of $37,900.

The CX-50 marks yet another step upscale for Mazda. Its price will be second-highest after the mid-size, seven-seat CX-9, and more than $7,000 higher than that for the CX-5, despite the CX-50 only being a bit larger. Mazda says the CX-50’s more rugged chassis sets it apart by allowing the new model to tackle tougher off-road terrain than any of the brand’s other crossovers.

A GT Turbo model, priced at $45,350, gets Mazda’s 2.5L turbo four-cylinder engine, promising 256 hp and 320 lb-ft of torque on premium fuel or 227 hp on regular. A GT Turbo Meridian Edition will join the lineup later in the year with all-terrain tires, rocker panel protection, and hood graphics. Mazda says it will reveal pricing for this package closer to its arrival in Canada.