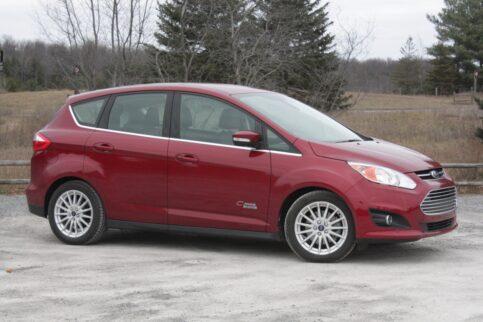 A few years ago, it looked like plug-in hybrid vehicles (PHEVs) would be the way of the future for the hybrid model segment. But the pace at which battery electric vehicle (BEV) technology is advancing means PHEVs may end up being a blip in the growth of the plug-in vehicle marketplace.

Still, PHEVs offer a desirable combination of gas-powered convenience with some of the quiet, efficient performance of a battery electric vehicle (BEV). If you’re a family driver looking for an affordable way to break into the PHEV segment, here’s a look at a few family-friendly PHEVs you can find today in the used marketplace.

Introduced in 2018, the Mitsubishi Outlander PHEV was the company’s second-ever plug-in vehicle, following up on the all-electric i-Miev that was discontinued in 2017. While moving from an EV to a PHEV may seem like a step backward, the plug-in Outlander was a more mainstream offering than the little i-Miev city car and enjoyed much better sales.

In early models, the Outlander PHEV is powered by a 2.0L four-cylinder engine and two electric motors, one of which was placed at the rear axle to provide AWD traction. Total power output is 197 hp, and Mitsubishi claimed a maximum of 35 km of all-electric driving on a full charge. In 2021, Mitsubishi replaced the 2.0L engine with a 2.4L, boosting output to 221 hp; the 2021 model also got a larger battery pack that added a few more kilometres of electric range. Note that while the gas-powered Outlander was redesigned in 2022, the plug-in model was carried forward from 2021, so Mitsubishi sold two different Outlander designs side-by-side for the 2022 model year.

When shopping for a used Outlander PHEV, watch for signs of battery degradation. If the battery is fully charged when you arrive for your test drive, the gauge cluster should show estimated electric driving range of close to 35 km in a 2018-2020 model, and nearly 40 km in a 2021 model with the larger battery pack. Some battery degradation is normal in a plug-in vehicle, but keep an eye on the electric range estimate as you’re driving: if it drops quite quickly relatively to how far you drive, that could point to an unhealthy battery.

More common is a failed 12-volt battery, whose job it is to power the car up when you push the start button. If the battery is weak, it can cause weird electrical problems even if it has enough power to start the car.

Next, have a look at the charge port cover, located above the right-rear wheel arch. When you open the cover, it should have a spring clip that holds it in place so that it doesn’t flop around on a windy day, for example. If the clip is missing or has come loose, watch this video for tips on how to reinstall it.

Once you’re inside the car, try pairing your smartphone with the Outlander PHEV’s Bluetooth system; some owners complain of phones not staying connected.

If an Outlander PHEV makes a burning smell when the gas engine is running, the cause is probably lubricants and coatings from the manufacturing process burning off hot engine parts. This is a common issue in PHEVs that have been driven mostly on electric power; the smell will go away on its own over time.

In 2019, Kia added a plug-in hybrid variant to its Niro lineup, which was previously offered only as a conventional hybrid. It matched a 1.6L gas engine with an electric motor for 139 hp and 42 km of electric range.

Before you start your test drive, check the engine oil level: if it is above the “full” mark on the dipstick and/or the oil smells like gasoline, the oil may have become contaminated with gas due to a fuel system fault. Even if the oil level is good and doesn’t smell like gas, ask your mechanic to look at the fuel system and try to determine whether the engine has suffered any damage due to fuel contamination.

Some Niro PHEV owners complain of a lurching sensation and a banging noise from the drivetrain during acceleration. This appears to be related to the Niro’s six-speed automatic transmission; some owners say that flushing the transmission fluid fixed the problem, but for others, having the transmission replaced was the solution. If you have any doubts about the condition of the transmission in the car you’re looking at, ask a mechanic to look at it during a pre-purchase inspection.

Another common complaint is a blown fuse in the Niro’s high-voltage system. If this happens, the best-case scenario is the appearance of number of warning lights on the dash, but it can also cause the drivetrain to shut down, leaving you stranded.

Finally, during your test drive, try to find a power outlet to which you can connect the 120-volt charger that should be included with the vehicle. Plug the car in to make sure it begins charging, which should happen automatically. If charging doesn’t start and/or the car shows an error message, suspect a problem with the car’s electrical system.

When test driving, listen for a noise from the Pacifica’s suspension that sounds like a stone being thrown up against the floor of the van. The noise may occur when driving over speed bumps at relatively low speeds, but some owners also report hearing it at high speeds and over smaller bumps. If a pre-purchase inspection reveals any worn suspension parts, these should be covered by Chrysler’s bumper-to-bumper warranty, if the van is within the warranty’s age and kilometre limits.

Either before or after your test drive, have a look at the PHEV system’s charge port and the cover that protects it when it’s not in use. The cover should pop open when you press the release button on the dash, and it should latch securely when you close it. Then, try to find a place where you can connect the van to a charger, whether it’s a 240-volt level two charge point or the 120-volt connector that came with the van when it was new (and should be included with your purchase of a used model). Connect and disconnect it multiple times, watching for any warning lights on the dash that could point to a fault in the van’s charging system.

Finally, operate all the Pacifica Hybrid’s infotainment and climate control functions to make sure they do what they’re supposed to. Then, go over the interior with a critical eye, making sure items like folding seats and power-operated doors work well.

The Ford C-Max Energi is a compact hatchback the automaker launched as part of its initial push into the PHEV segment. It was accompanied by a conventional hybrid model that differed only in its lack of plug-in charging.

The C-Max Energi’s performance comes from a 2.0L gas engine that works with an electric motor to make 185 hp. On a full charge of its battery, a C-Max Energi should be capable of about 30 km of all-electric driving range.

Some C-Max Energi owners complain of 12-volt batteries that lose voltage or go dead altogether. A hybrid’s complex electric system is sensitive to a weak 12-volt battery, which can trigger warning lights and other issues even if the car runs fine otherwise.

If you hear a squeaking sound from the rear of the car while driving, it could be caused by a loose shield around the high-voltage battery. Also, listen for suspension noises when driving over rough roads; many C-Max owners complain of chassis components that wear out more quickly than expected.

Find a safe place to park the car so you can explore the Sync touchscreen infotainment system’s functions; watch for slow responses or spontaneous reboots that can indicate the need for a software update. Finally, ask the seller if they have detailed service records; if so, make sure the car has been maintained according to Ford’s service schedule, and that all maintenance was done by a Ford dealer, whose technicians have the training to properly diagnose and repair the C-Max’s hybrid powertrain.