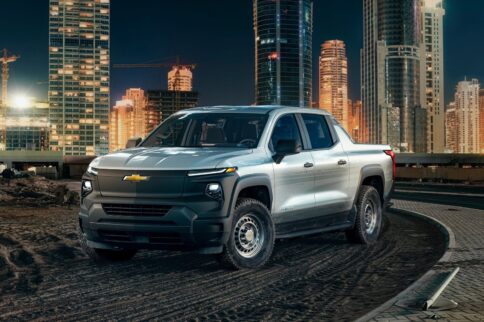 Every year, Las Vegas’s Consumer Electronics Show plays host to some of the world’s most innovative technological innovations. In recent years, automobiles have become a fixture at CES, thanks to the rise of in-car electronics and tech-intensive electric vehicles.

Several automakers used the 2022 CES to showcase forthcoming battery-powered production models as well as some concepts that look ready for the showroom floor. Here are a few of the highlights.

Chevrolet used the CES stage to reveal the Silverado EV, which will be the second mainstream electric pickup model (after the Ford F-150 Lightning) to reach the market when it launches next year.

Other Silverado EV tricks will include 350 kW DC fast charging that will add up to 160 km of driving range in 10 minutes, the ability to power your home or charge another EV, and a front trunk under the truck’s “hood.”

In 2023, Chevrolet says it will also roll out electric versions of its Blazer and Equinox crossovers in the spring and fall, respectively. General Motors hasn’t revealed many details of these two models yet, but says the Equinox will be priced to start around US$30,000.

Not only will the 2023 BMW iX M60 be the first electric M car, but its 811 lb-ft of torque is the most of any production vehicle in the company’s history. The M60’s motors will also produce 610 hp and propel the car from 0-100 km/h in 3.8 seconds, matching the time set by the similarly sized BMW X5 M Competition. The iX M60 also promises 450 km of driving range on a full charge of its battery.

Chrysler’s CES reveal was the Airflow Concept, which previews a production model set to arrive by 2025 to kick off the brand’s transformation to an all-electric automaker.

The Airflow name is not new: The original Chrysler Airflow was a 1930s full-size sedan notable for its aerodynamic design. Needless to say, the Airflow Concept shares nothing else with its namesake. Chrysler hasn’t revealed performance specs for its first-ever fully electric vehicle, but says it’s aiming for 350 to 400 miles (560 to 645 km) of driving range from the car’s dual 150-kW electric motors.

If all goes to Chrysler’s plan, the Airflow will be the first of several electric vehicles from the brand, which aims to be all-electric by 2028. Today, Chrysler’s portfolio contains two plug-in vehicles: the Pacifica Hybrid minivan and a PHEV version of the Jeep Wrangler off-road SUV.

Sony is no stranger to the Consumer Electronics Show (CES), as one of the world’s best-known high-tech brands. This year, the company used the event to show off an EV concept called the Vision-S 02 SUV and announce the creation of a mobility division it will use to try to establish itself as an automotive brand.

The Vision-S 02 is Sony’s second concept car, following the Vision-S sedan it revealed at CES two years ago.

Unsurprisingly for a car created by an electronics company, the Vision-S 02’s interior boasts an immersive music experience and front and rear video entertainment displays.

There’s no word on when Sony wants to start delivering vehicles to the public, but it will complete the rollout of its new mobility division in the spring.