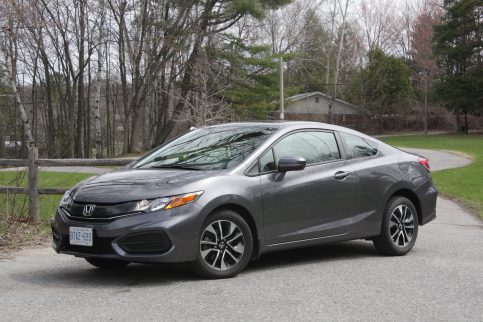 The compact-car mainstream consists of mainly four-door sedans or hatchbacks. However, a few automakers have toyed with coupe models to appeal to drivers who feel that a two-door car looks sportier, regardless of what’s under the hood.

Honda is the only carmaker that has produced a small coupe for any significant period of time. It began selling the first Civic coupe in the early 1990s, and has consistently offered a two-door version of that popular car since.

Hyundai, Kia and Scion have tried to capitalize on the Civic coupe’s popularity, but none of those brands were able to make it happen. As we write this at the end of 2019, the Honda Civic coupe is the only remaining small mainstream two-door car.

If you’re in the market for an affordable small two-door, read on to learn what to watch for in the various models available in the used marketplace. 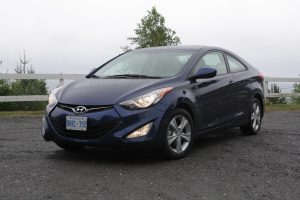 Hyundai added the first-ever Elantra Coupe in 2013. It differed very little from the four-door version, not even benefitting from a more potent engine to go with its sportier look. It generated few sales, and went away after 2014.

The Elantra’s 1.8L “Nu” engine is known for piston slap, which generates a ticking or knocking noise. You can hear it in this video. (https://www.youtube.com/watch?v=6lzWYtq5fTg ) According to this (https://www.hyundaiproblems.com/nu-engine-tick/ ) Hyundai Canada issued a service bulletin to address the issue, but is picky about which cars it repairs under warranty.

Some owners complain of steering that “sticks” very slightly with the wheel at the straight-ahead position. Hyundai apparently revised the Elantra’s steering for 2012 models, but this doesn’t seem to have satisfied everyone who bought one. (https://www.hyundai-forums.com/231-md-2011-elantra/134452-2012-elantra-steering-calibration.html)

Many owners of the previous-generation Elantra talk about mysterious instances of the trunk opening by itself. Here’s a thread discussing the same problem, but in 2011 through 2013 models. The question is whether it’s an electronic fault of some kind or a case of remote trunk-release buttons being pressed accidentally.   (https://www.hyundai-forums.com/231-md-2011-elantra/148754-2013-elantra-trunk-opens-randomly.html)

An engine that takes an abnormally long time to start could have a failing fuel pump. (https://www.hyundai-forums.com/231-md-2011-elantra/153269-engine-cranking-longer-before-starting.html)

Elantras sold from 2011 through 2013 were among the vehicles for which Hyundai had “miscalculated” fuel-consumption ratings. The original and revised ratings for the Elantra (and various other models) can be found here. (https://hyundaifuelconsumption.ca/overview/affected-models) 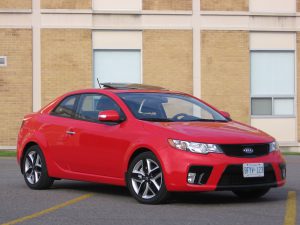 Hyundai’s Kia subsidiary had better sales success with its compact two-door Forte Koup. Its styling was better differentiated than the Elantra’s, and Kia offered Koup buyers the option of more power, including a turbo engine available in the second-generation model introduced in 2014. For 2011, Kia replaced the first-generation’s four- and five-speed manual and automatic transmissions with six-speeds in all models.

In older cars, watch for leaky engine-oil pans. (https://www.forteforums.com/forums/kia-forte-2-4l-engine-discussion/9929-am-i-being-unreasonable-oil-leak.html) In most cases, leaks are minor, but even a few drips can make a mess. (https://www.forteforums.com/forums/kia-forte-2-0l-engine-discussion/10092-my-2-0-oil-pan-leak.html)

Some first-gen models with the SX trim’s upsized engine were known to exhibit rough shifting in the five-speed automatic transmission. (https://www.kia-forums.com/kia-forte-cerato-td-koup-discussion/55002-sx-2-4l-w-auto-trans.html)

Listen for creaks and rattles during your test drive. (https://www.forteforums.com/threads/creaking-clicking-noises-from-the-dash-2012-forte.10143/ )

If you hear a soft thud or thump from the front suspension, it could be caused by suspension bump stops that get stuck and fall back into place. (https://www.forteforums.com/forums/do-yourself-articles/326-diy-strut-noise-fix.html)

Now, on to second-generation (2014-2017) models. Here’s a discussion about popping sounds from the steering in newer models. (https://www.forteforums.com/threads/popping-sound-when-turning-steering-wheel.39874/ )

Here’s a discussion about intake-valve carbon deposits that can result from the Forte’s direct fuel-injection system. Note that this issue is not specific to Kia, but is a known problem in all direct-injection engines. (https://www.forteforums.com/threads/dont-buy-a-gdi-engine.59210/ )

This chat is about hesitation in Forte Koup models with the turbo engine. (https://www.forteturbo.org/forum/19-kia-forte-turbo-performance/176-hesitation-surging-while-driving-everyone-please-read.html ) 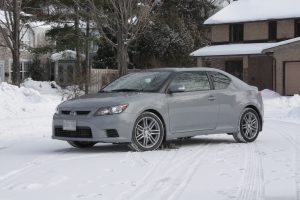 The second-generation Scion tC was this Toyota brand’s first two-door model in Canada. Technically speaking, the tC is a hatchback, but its notchback styling is closer to that of a coupe. It’s powered by a four-cylinder engine shared with a variety of Toyota models.

Here’s a discussion about rattling sounds from the tC’s sunroof. (https://www.scionlife.com/forums/scion-tc-2g-owners-lounge-1824/moonroof-making-clicking-noise-anyone-else-198551/ )

In this discussion, owners are asked to post any problems they’ve had with their cars. (https://www.scionlife.com/forums/scion-tc-2g-owners-lounge-1824/any-problems-your-tc2-202140/ )

This thread deals with an owner’s quest to find the cause of a rough idle. (https://www.scionlife.com/forums/scion-tc-2g-owners-lounge-1824/2012-scion-tc-idle-problem-226779/ ) On a related note, a few owners here complain about an engine that starts rough. (https://www.scionlife.com/forums/scion-tc-2g-drivetrain-power-1826/rough-starting-idle-201535/ )

This chat lists Toyota technical service bulletins that apply to the tC. (https://www.scionlife.com/forums/scion-tc-2g-owners-lounge-1824/possible-get-tsb-thread-started-208788/ ) 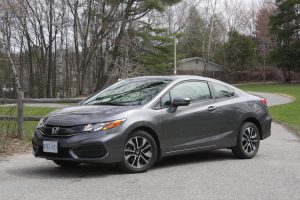 Honda redesigned the Civic in 2012 and then refreshed it again in 2013, after the 2012 was poorly received by consumers and the media. In the coupe’s case, the exterior stayed the same, but the 2013 model’s interior is a bit different. Regular Civic Coupe models come with a 1.8L engine, and the standard transmission is a five-speed manual. In 2012 and 2013, the option was a five-speed automatic, which changed to a continuously variable transmission in 2014. The speedier Si uses a 2.4L motor and a six-speed manual.

In this chat, owners discuss possible reasons for hesitation during acceleration. (https://www.civicforums.com/forums/355-engine/347957-2012-civic-ex-l-hesitation-when-accelarating.html ) In a similar vein, this owner describes a shudder sensation when resuming acceleration after coasting. (https://www.civicforums.com/forums/355-engine/371887-2012-shudder-jerk.html )

Here, owners discuss whether some oil consumption is normal in the Civic’s 1.8L engine. (https://www.civinfo.com/forum/general-discussion-9g/100863-new-civic-oil-burning.html )

Other things to know

Watch for modified cars: With the exception of the boring Elantra coupe, these cars are popular with the tuner crowd, owners who install aftermarket components that often promise sportier performance. Be wary of used coupes with aftermarket parts on them, as they can void remaining warranty coverage on later-model cars.

Sporty models may have been driven hard: This is especially true for the Honda Civic Si, a favourite among fans of fun compacts. While it could be argued a sporty car was built to be driven in an enthusiastic fashion, there’s a difference between fun and abuse. A good mechanic will be able to pick out signs of a car that has been beaten up by a previous owner.

Turbos require more diligent maintenance: This only applies to certain newer versions of the Kia Forte, but it’s good advice, given the popularity of turbocharging in modern cars. Turbochargers generate a lot of heat, which accelerates oil degradation. Stick to the manufacturer’s recommended severe-service oil-change interval, which applies to most cars driven in Canada.