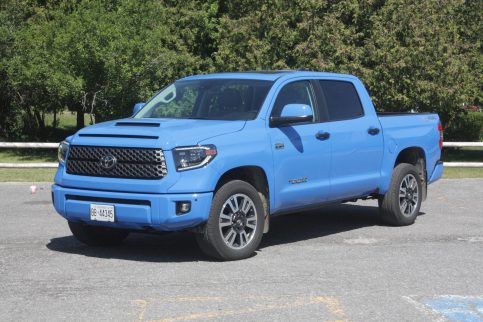 North America’s love of pickup trucks and Toyota’s reputation for reliability seem like a match made in heaven. And yet the Toyota Tundra is a perpetual sales underdog in the full-size truck segment. 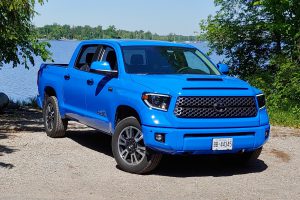 Why aren’t Toyota’s pickups more popular? It’s mainly because Toyota refuses to offer discounts and incentives to drive sales the way General Motors, Ford and Ram do with their full-size truck models. Those relatively few Tundra buyers are in it for the long run, though, with a truck promising bulletproof reliability and the strongest resale value in the segment. Deals on new vehicles depress values on the used market, so all those discounted domestic trucks will be worth less than a Tundra a few years down the road.

Toyota also doesn’t update the Tundra as frequently as Chevy, GMC, Ford and Ram redesign their full-size models. The Tundra got a styling refresh in 2014, and its most recent full redesign was way back in 2007.

For 2020, the Tundra drops its entry-level 4.6L engine, leaving a 5.7L V8 as the sole powerplant, and adds Apple CarPlay and Android Auto and a suite of remote connectivity services as standard.

There are also a pair of new TRD (Toyota Racing Development) trim levels, including the TRD Sport Premium package fitted to my Voodoo Blue tester.

The Tundra’s 5.7L V8 is Toyota’s largest engine, but not its most powerful (that title goes to the 5.0L in the Lexus LC luxury coupe). It feels perfectly capable of moving the Tundra and whatever you want to haul with this truck.

The Tundra’s 6-speed transmission is also a comparatively old piece of technology compared to the 8-, 9- and 10-speed automatics in Toyota’s competitors. 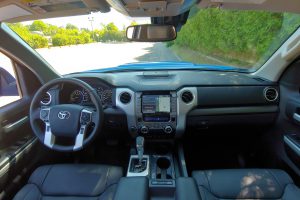 The result is that the Tundra is the least-efficient pickup on the market today, a strange position for Toyota to be in, given its expertise in fuel-saving technologies. My Tundra tester averaged 18.1 L/100 km in a week of city driving. Meanwhile, a Chevrolet Silverado 1500 diesel I drove in February 2020 averaged 11.8 L/100 km in wintry conditions.

Crew cab pickups are popular because they provide everyday family practicality along with truck utility. The Tundra succeeds in that department with a spacious rear seat accessed through large doors that open nearly 90 degrees. The rear bottom seat cushions also fold up to make room for cargo you don’t want exposed to the elements. 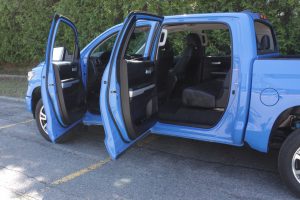 I also appreciated some of the Tundra’s secondary controls. The radio volume and tuning dials are ringed with rubber for better grip, and the large climate knobs are easy to use while wearing gloves.

The Tundra is unique among full-size trucks for its roll-down rear window. In other trucks, only the middle section of the back glass slides sideways for extra airflow.

On the downside, while the front seats are wide, their hard, flat bottom cushions provide no lateral support when taking corners.

The most noticeable difference in the loaded Tundra’s drive was its smoother ride. Unloaded, the big Toyota suffers a rougher ride than some key competitors, like the Chevrolet Silverado I tested in February 2020.

Also, I wished for an assist step to help me climb up into the cargo box when it was time to shovel out all that dirt. 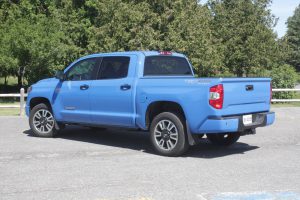 2020 Toyota Tundra pricing starts at $40,650 with its standard V8, rear-wheel drive, double cab and long cargo bed. That’s a few thousand more than any of Toyota’s domestic competitors, but the F-150, Chevrolet Silverado and GMC Sierra 1500 and Ram 1500 all start out with less-powerful engines and in a regular cab configuration.

Comparing the Tundra’s price and features to its domestic competitors is tough, because Ford, GM and Ram boost sales with discounts and incentives. Suffice it to say if you shop a similarly equipped truck from a domestic brand, it is likely to be less expensive than the Tundra.

That said, Ford, GM and Ram all offer more high-tech kit that makes it easier to – among other things – tow a trailer. The Tundra comes with forward collision detection and avoidance, lane departure alert, radar cruise control and automatic high beams. The only other high-tech driving aid is the blind spot monitoring setup that was included in my tester’s TRD Sport Premium package.

Toyota’s reputation for building reliable, long-lasting vehicles is a fine reason to choose the Tundra over other full-size trucks, but in today’s competitive pickup market, it can’t be the only one.