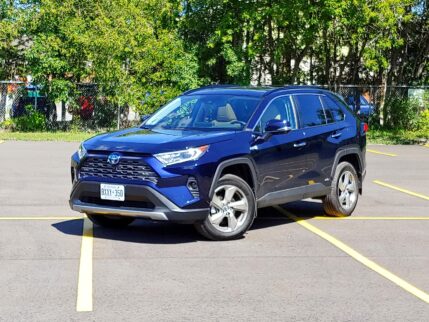 A hybrid SUV makes sense for a number of reasons. Key among them is the fact that a big, bulky vehicle benefits from a hybrid powertrain’s more generous electric torque and reduced fuel consumption.

Toyota knows this, having added the popular RAV4 compact crossover to its roster of gas-electric models in 2017. It has also reintroduced the mid-size Venza powered exclusively by the same powertrain as the RAV4 Hybrid.

For 2021, Toyota has further enhanced its hybrid SUV offerings with a plug-in model called RAV4 Prime that can go 68 km on electricity alone. As incredible as it sounds, the company says the plug-in RAV4 is also its second-quickest model, after the Supra sports car.

The standard RAV4 Hybrid is less of a performance showpiece for electric driving, but remains a great primer on the benefits of battery power in a small crossover.

Calling the RAV4 a compact crossover refers more to its pricing and position in the marketplace than its size. From the driver’s seat, the RAV4 Hybrid feels more like a mid-size model, thanks to the view out over a broad hood. But the wide front centre console has the opposite effect of making the cabin feel smaller than it is.

Headroom is good all around, but in my tester it was actually better in back because of the space eaten up by the sunroof.

The RAV4’s big climate control dials suit the car’s rugged look, and the large touchscreen is easy to see and use. One of the few places the cabin loses ergonomic points is for a volume knob that’s a long reach from the front passenger seat.

My Limited-trim test car came with an 11-speaker JBL-branded stereo that doesn’t sound as good as it should. On the plus side, Toyota added Android Auto connectivity to the RAV4’s infotainment system for the 2020 model year, a function conspicuous by its absence when this generation arrived in 2019.

Limited trim also includes a camera-based rearview mirror that activates when you flip the day/night lever to the nighttime setting. It uses a camera lens on the tailgate to project an image to the mirror, which eliminates blind spots. It can be tricky to use, though, because it forces your eyes to refocus every time you look at it.

Toyota says the RAV4 Hybrid’s powertrain makes 219 hp, up from the gas-only model’s 203. Toyota doesn’t publish combined torque figures for its hybrid models, but here it feels like a lot more than the 184 lb-ft posted by the regular RAV4.

Power delivery is smooth, thanks to the RAV4 Hybrid’s continuously variable transmission, which eliminates the busy performance of the gas model’s eight-speed automatic.

When I drove a gas-powered RAV4 last year, my top complaint was its gruff-sounding engine. The RAV4 Hybrid fixes that by making its electric motors (there’s one up front and a second in back to provide all-wheel drive) do a lot of the work in getting the car up to speed.

On the downside, the RAV4 Hybrid’s brakes take getting used to. Like all electrified vehicles, it uses a combination of traditional friction brakes and regenerative braking that’s handled by the electric motor, which turns into a generator when coasting or slowing. The transition from regenerative to friction brakes is often abrupt, especially at lower speeds. You’ll probably get used to it after a few days of driving, but you’ll experience some jerky performance the first few times you take the wheel.

That builds on the XSE’s notable additions of a sport-tuned suspension and the camera-based rearview mirror.

Features-wise, the RAV4 Hybrid’s best value is in XLE trim, which comes with rain-sensing wipers, a sunroof, power tailgate, passive keyless entry, and a heated and leather-trimmed steering wheel.

The Toyota RAV4 Hybrid’s big plusses compared to the standard model are its better fuel economy and added low-end power. For me, however, the main selling point is the hybrid drive system’s smoother, quieter performance, which takes the RAV4 from good to great.