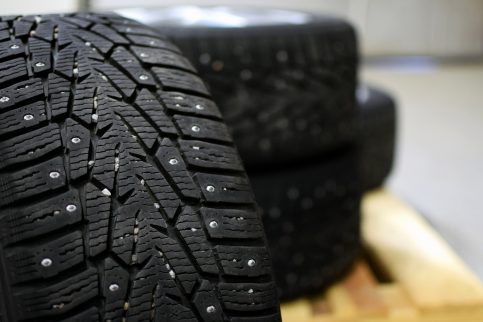 Studded tires provide the ultimate grip on icy roads. However, they face heavy regulation in Ontario. In this blog post, we’ll give you a quick overview on the status of studded tires. 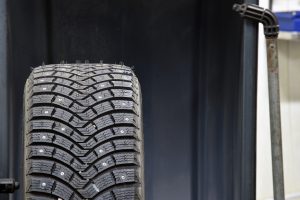 What Are Studded Tires?

Studded tires have small metal studs spread out throughout the tire tread and better grip soft ice and snow than standard winter tires. However, studded tires can also damage roads, making them harmful in areas where winter is marked with several thaws throughout.

Their use is regulated at the provincial level. Although we’re only going to cover Ontario in this blog post, if you plan to drive elsewhere in Canada and have studded tires, be sure to check with the provincial ministry of transportation for the province you’re visiting if studded tires are allowed.

The Legal History of Studded Tires

Studded tires were banned in Ontario in 1972. The government lifted part of the ban in 2005 to allow those with a northern address in Ontario to keep using studded tires in the winter. In Algoma, Cochrane, Kenora, Manitoulin, Nipissing, Parry Sound, Rainy River, Sudbury, Thunder Bay, and Temiskaming Territorial Districts, drivers can use studded tires between September 1st and May 31st for vehicles registered in these areas.

In 2019, the Ontario government again eased some regulations so that newer models of studded tires could be installed. These models have more but lighter studs than previous models. However, their use is still permitted only in Northern Ontario.

However, the latest generations of winter tires retain their elasticity even when temperatures begin approaching -30 degrees Celsius and even lower. According to the Tire and Rubber Association of Canada, modern winter tires offer up to 50% more traction than all-season tires do. That increased traction can decrease the likelihood of your landing in an accident in the winter months, so don’t try to save money by not switching your tires when the thermometer drops.

It doesn’t look like Southern Ontario drivers will be able to use studded tires anytime soon. The last attempt at a public debate about the studded tire ban I could find was from 2016. So for now, make sure you are winter tires have enough tread to give you that increased traction, and drive as safely as possible.