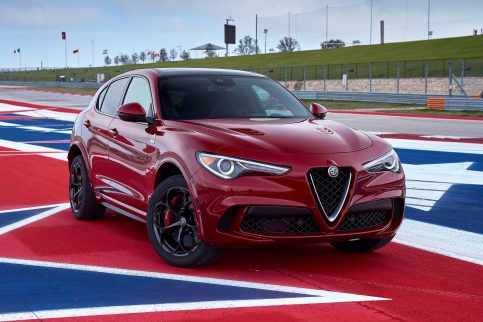 For the final instalment in our series of articles about buying a used compact luxury SUV, we’re examining the “other” half of the European slice of this vehicle segment.

This last quartet of upscale SUVs comprises the Alfa Romeo Stelvio, introduced in 2018; the Jaguar F-Pace, which arrived for the 2017 model year; the Land Rover Discovery Sport, a new model the British brand added in 2015; and the Porsche Macan, which also went on sale as a 2015 model.

Introduced in 2018, the Stelvio was Alfa Romeo’s first-ever SUV, arriving in North America after the 4C sports car and Giulia sedan.

Alfa offers the Stelvio with two engines: Most trims use a 2.0L turbocharged four-cylinder (280 hp/306 lb-ft of torque), while the Quadrifoglio high-performance variant gets a 2.9L turbo V6 making 505 hp and 443 lb-ft. All-wheel drive and an eight-speed automatic are standard with both motors.

Some Stelvio drivers say the display in the gauge cluster randomly turns off, but can sometimes be brought back to life by disconnecting the battery for a few minutes. (https://www.stelvioforum.com/threads/center-display-cluster-went-dark.11797/)

Another common complaint is that of dead batteries, which some owners think is linked to a high-pitched sound they’ve heard after parking their cars. (https://www.stelvioforum.com/threads/discovered-battery-death-spiral.11769/) A weak battery can also cause a variety of weird behaviour in the Stelvio’s electronic systems. (https://www.stelvioforum.com/threads/major-electrical-issues.3777/)

When test-driving a used Stelvio, inspect the carpet in the front passenger footwell for moisture. A few owners have reported water leaks from behind the dash on that side of the car. (https://www.stelvioforum.com/threads/water-leak-from-behind-glove-compartment.9753/) This type of leak has also been associated with electrical issues. (https://www.stelvioforum.com/threads/water-intrusion.10059/) In 2018, Alfa recalled the Stelvio to fix a potential water leak in the tailgate that could cause the cargo door to open on its own while the car is in motion. (https://wwwapps.tc.gc.ca/Saf-Sec-Sur/7/VRDB-BDRV/search-recherche/detail.aspx?lang=eng&mk=22636!36276!2686!2220&mkName=ALFA%20ROMEO&md=STELVIO&fy=0&ty=9999&ft=&ls=0&sy=0&syName=All%20Systems&all=0&rn=2018150&cf=SearchResult&pg=0)

Take a look at the rear brakes to see what shape the pads and rotors are in. A number of Stelvio drivers say they’ve had to replace rear brake components sooner than they expected. (https://www.stelvioforum.com/threads/rear-brakes-worn-out-in-8-500-miles.15691/)

The Jaguar F-Pace entered the compact crossover race a year earlier than the Stelvio. Like Alfa, Jaguar was new to the SUV market.

Jaguar has devised a fix for a creaking noise from the rear suspension, which is linked to bushings that need to be replaced. (https://www.jaguarforums.com/forum/f-pace-x761-c-x17-87/f-pace-fe-suspension-problems-164560/)

Here’s a discussion about a rubbing noise from the front end that could be linked to a faulty output shaft bearing at the front axle in some F-Pace models. (https://www.fpaceforums.co.uk/viewtopic.php?p=52324#p52324)

If the tires slip a bit when accelerating through a tight turn, that’s apparently a normal trait of the F-Pace’s combination of suspension design, AWD system, and large tires. (https://www.fpaceforums.co.uk/viewtopic.php?f=11&t=3656)

During your test drive, have a look at the leather on the F-Pace’s seats. Some drivers are unhappy with how the upholstery holds up over time. (https://www.fpaceforums.co.uk/viewtopic.php?f=11&t=1730)

When test-driving an F-Pace, pay attention for vibrations and a droning noise at highway speeds, as described here. (https://www.fpaceforums.co.uk/viewtopic.php?f=11&t=3277)

Finally, take some time during your test to run through the infotainment system functions. If the system reboots on its own, freezes, or goes dark, it may need a software update. (https://www.fpaceforum.com/threads/firmware-software-problems-with-ict-ictp-infotainment-systems.11106/) On a related note, Jag recalled some F-Pace models to fix digital gauge displays that go blank. (https://www.fpaceforum.com/threads/recall-h056-virtual-instrument-cluster.38650/)

If you’re looking at a car with a power tailgate, watch how it closes. It should latch gently, not slam closed the way some owners describe here. (https://www.fpaceforum.com/threads/trunk-boot-lid-hatch-doesnt-always-soft-close.34921/)

In 2015, Land Rover replaced its compact LR2 SUV with an all-new design it christened the Discovery Sport. Initially, power was from a 2.0L turbo four-cylinder (240 hp/250 lb-ft). A 2018 styling refresh brought a more powerful version of that engine making 286 hp/295 lb-ft. All-wheel drive and a nine-speed transmission were standard regardless of engine. The Disco Sport, as this truck is known casually, is unique in this class for having a small third row of seats.

A few Disco Sport drivers complain of a power tailgate that opens and/or closes on its own. (https://www.discoverysport.net/threads/boot-open-and-closing-issues.11073/)

Other owners say they’re disappointed in the Discovery Sport’s electronic systems, citing poor infotainment performance (https://www.discoverysport.net/threads/touch-screen-system-sucks.8322/) and a Bluetooth system that frequently drops calls. (https://www.discoverysport.net/threads/bluetooth-connection-not-stable.12590/) When you’re test-driving a used Disco Sport, try out both systems before you buy to avoid frustration and the potential cost of replacing faulty hardware.

The compact Macan was Porsche’s second SUV model at its 2015 arrival, following the mid-size Cayenne that had been around for more than a decade at that point.

In 2019, Porsche rebooted the Macan with an update that some consider substantial enough to count as a new generation.

The Macan’s V6 engines are known for oil leaks from the timing chain cover. Apparently, the fix involves removing the engine from the car and 40 hours’ worth of labour charges, which you’ll be on the hook for if your Macan’s warranty has expired. (https://www.macanforum.com/threads/oil-leak-anyone.146697/) Also, note that the Macan’s engines do not have a traditional dipstick for checking the oil level. Instead, the oil is monitored electronically in the gauge cluster.

According to this discussion, many Macan owners have complained about faulty AWD transfer cases. (https://www.macanforum.com/threads/transfer-cases.14713/) In 2020, Porsche acknowledged the issue and extended warranty coverage for the Macan’s transfer case. (https://www.pcarwise.com/news/porsche-extends-transfer-case-warranty/)

During your drive, pay attention to the transmission’s performance. It should change gears smoothly and quickly; if shifting is clunky, you might be better off looking at a different used Macan, as Porsche’s dual-clutch PDK transmission is quite expensive to replace.

Listen also for clunking noises or vibrations from the driveline, which could point to a faulty driveshaft support bearing.

If you’re testing a used Macan with air suspension, try out the adjustable ride height function to make sure the system works as it should. (https://www.macanforum.com/threads/air-suspension-problems.169769/)

Shift the Macan’s transmission into reverse to activate the backup camera; some owners complain theirs project a low-quality image in the dash display. (https://www.macanforum.com/threads/photos-of-macan-rear-view-camera-quality-differences.20042/)

Look here for a comprehensive list of the Macan’s known issues. (https://www.pcarwise.com/local-help/used-porsche-buyers-guide/macan/)