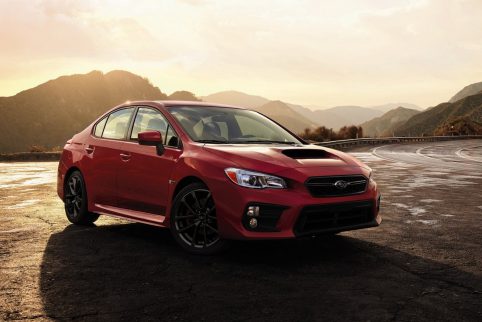 These days, vehicles with 300 hp – or more – aren’t hard to come by. Many family sedans, minivans, and SUVs can be optioned with engines that approach or exceed that threshold in order to provide satisfying everyday performance.

But the 300-hp marker means something much different in a sporty compact car. What feels mundane in a large family vehicle turns a small sedan or hatchback into a seriously fun ride. And right now is a good time to be in the market for a speedy used compact car.

Subaru redesigned its WRX STI into a new generation in 2015, the same year the Mitsubishi Lancer Evolution went away. In 2016, Ford rolled out the Focus RS and Volkswagen redesigned its Golf R, and 2018 saw Honda bring its Civic Type R to North America for the first time. Then, in 2019, Hyundai introduced the high-performance Veloster N, so named for the suspension tuning the company did at Germany’s Nurburgring racetrack.

In other words, you’ve got options. Read on to learn what to watch for when shopping around.

For its few years on the market, the Ford Focus RS was the most performance-oriented version of this popular compact. Under the hood is a 2.3L turbocharged four-cylinder engine that generates 350 hp and a matching 350 lb-ft of torque. A six-speed manual transmission directs that power to all four wheels.

According to this discussion, head gasket failures are a known issue in the Focus RS’s engine. Apparently, the flaw only affects early versions of the car, but a failed head gasket can cause big trouble if not caught and repaired promptly. During your test drive, check for a low engine coolant level and watch for white smoke and/or a sweet smell from the exhaust. Both are signs of a leaky gasket that is letting the engine consume and burn coolant.

And in this chat, owners discuss engine oil leaks that could be related to the faulty head gasket issue.

Here’s a discussion about torque steer, a tendency for powerful AWD (or front-wheel drive) cars to pull to one side during hard acceleration.

In this thread, one Focus RS owner tells their story of a failed clutch on a car with just 3,000 miles (about 5,000 km) on the odometer.

The Civic Type R starts out as a Civic hatchback, onto which Honda bolts a 2.0L, 306-hp turbo four-cylinder, sharp-handling suspension, and a wild body kit. If you want subtle speed, look elsewhere. Honda opted for a front-wheel drive setup and a six-speed manual transmission for the Type R.

Many Civic Type R owners have complained of grinding sounds heard while shifting the car’s transmission. Here’s a later post in the same discussion suggesting that adjusting the clutch pedal can fix the problem.

The Civic Type R was included in a safety recall to replace faulty fuel pumps that could cause the engine to stall.

There are many posts by Civic Type R owners who have accidentally downshifted into too low a gear and over-revved the engine, suggesting this is an easy mistake to make.

Hyundai introduced its second-generation Veloster in 2019 with a lineup that included the Veloster N, named for the Nurburgring racetrack in Germany where Hyundai developed the car’s handling. It’s a high-performance variant with a 2.0L turbo four-cylinder making 275 hp and 260 lb-ft of torque. Like the Civic Type R, it has front-wheel drive and a six-speed manual transmission.

The Veloster N hasn’t been on the market long, so as we write this, there aren’t many reports of reliability or durability problems. However, there are several mentions in enthusiast forums of engine performance complaints.

Here, Veloster N fans discuss a solution for an engine that stalls and is hard to start. There are other complaints about engine misfires, fuel system issues, and engines that stutter at startup or “bog down” during acceleration, which could be related to the same fault.

Mitsubishi redesigned its 2008 Lancer compact into a lineup that included North America’s first high-performance Evolution variant. This rally-inspired car generates 291 hp and 300 lb-ft of torque from a 2.0L turbo four-cylinder. All-wheel drive and a five-speed manual transmission were standard, and a six-speed dual-clutch automatic was optional.

One of the Evolution’s known flaws is a failed pump on the car’s active centre differential. Here’s a collection of documented failures and this YouTube video about the issue provides some useful details.

Subaru redesigned its WRX STi into a new generation for 2015, the first not available as a hatchback. It uses a 2.5L turbo four-cylinder engine with 305 hp and 290 lb-ft of torque. All STi models came with a six-speed manual transmission. Subaru carried over the 2015 model’s engine from the previous generation of the car, so there’s a lot of information out there about its durability.

Connecting rod bearing failures are a known issue in STI models going back to cars from the late 2000s. The redesigned model that arrived in 2015 used the same engine and is susceptible to the same problem. This discussion rightly describes failed rod bearings as a “nightmare.”

In this thread, STI owners discuss leaking rear differentials. And here’s a chat about what type of engine oil provides the best protection in the STI.

When looking at a used STI, check the corners of the trunk lid for chipped paint.

During your test drive, find some uneven pavement and listen for a clunking noise from the steering.

The 2016 VW Golf R was the second generation of this speedy hatchback. But where the original was a limited-production model, this newer version was more widely available for the four years it was in VW’s showrooms. It derived 292 hp and 280 lb-ft of torque from a turbocharged 2.0L four-cylinder, which was directed to all four wheels by a standard six-speed manual transmission or a six-speed dual-clutch automatic.

Clutch problems appear common with the six-speed manual transmission, especially in cars that have been modified to make more power.

We think the Golf R’s dual-clutch transmission is a good fit in this car with its quick gear changes and smooth performance. However, not all owners enjoy their experience with it.

We present this discussion about Golf R turbo failure not to suggest it’s a common issue, but as a reminder that small, high-powered turbocharged engines require diligent maintenance for reliable running.

The Golf R’s AWD system uses a hydraulic clutch to divide power between the front and rear wheels. The fluid runs through a filter that can get clogged and affect the car’s performance. According to some owners, VW’s maintenance schedule includes changing the fluid periodically, but not cleaning the filter.