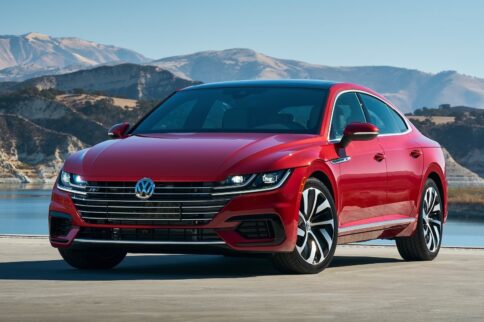 In 2010, the Porsche Panamera became the closest thing to a sedan the company had ever offered. This four-door car was conceived to compete with German mid- and full-size sedans like the BMW 5 and 7 Series and Mercedes-Benz E- and S-Class.

What set the Panamera apart was its fastback body style, with a long hatchback that allowed access to a large cargo area. The Panamera spawned copycats from Porsche’s German luxury brand competitors, like the Audi A5 and A7 Sportback, the Mercedes-Benz AMG GT, and the BMW 4 Series Gran Coupe.

The Panamera also inspired a handful of lower-priced fastback models that toe the line between the mainstream and luxury car segments, and it’s those cars we’re looking at in this article.

The best-known of the three cars we’ll discuss here is the Kia Stinger, introduced in 2018 as part of the brand’s strategy to move upscale and improve its image among driving enthusiasts. Volkswagen’s Arteon is that company’s newest flagship car model, which replaced the Passat and CC in 2019. Filling out our trio is the short-lived Buick Regal Sportback, which came out in 2018 as the final generation of the Regal.

Read on to learn what to expect when shopping for a used – or, in the case of the Stinger and Arteon, new – mid-size near-luxury fastback.

Kia designed the Stinger around a platform shared with the Hyundai-built Genesis G70. The Stinger comes standard with AWD and, in most model years, a 3.3L twin-turbo V6 making 365 hp and 376 lb-ft of torque. The only exception was a 2019 base model that uses a 2.0L turbo four-cylinder with 255 hp/260 lb-ft; it was discontinued after one year on the market. All Stinger models come with an eight-speed automatic transmission.

Kia’s Stinger fuel consumption ratings are 13.6/9.6 L/100 km (city/highway) for cars with the V6, and 11.1/8.1 for the less-common four-cylinder version. On Fuelly.com, Stinger drivers report average fuel consumption of just over 11.0 L/100 km in real-world driving.

If you’re shopping for a new Stinger, Kia has updated the car for 2022 with refreshed styling. A 15-speaker Harman Kardon stereo is newly standard (it was an option in 2021 cars) and a 10.25-inch infotainment display replaces last year’s 7.0-inch (standard) and 8.0-inch (optional) touchscreens.

Should you be shopping for a used Stinger, there are a few things to watch for.

A few owners report feeling a shudder when they make tight turns at low speeds, which is apparently caused by the rear differential. Kia issued a service bulletin that suggests new differential lubricant will help, but in a few cases, dealers had to replace the differential altogether.

Here’s a discussion about Stinger stereo settings that change randomly. While you’d think a software update would fix this issue, Kia’s fix is to replace the stereo head unit, which is a significant amount of work. When test-driving a Stinger, spend some time using the touchscreen-based controls to make sure everything works properly. Any slow responses or system crashes could mean the car needs expensive new hardware.

During your test drive, listen for creaks or rattles from the Stinger’s tailgate. According to this discussion, Kia has put out two service bulletins to help its dealer techs address this complaint.

Finally, find a quiet, straight section of road where you can hit the brakes hard to suss out any stopping issues. Some owners complain about a soft brake pedal, and others say they’ve had to replace pads and rotors due to premature wear.

The striking Arteon fastback is powered by a 2.0L turbo four-cylinder engine (268 hp/258 lb-ft) with standard AWD and an eight-speed transmission.

If you’re shopping new, the 2021 Arteon got a styling update that makes the car look more upscale.

When test-driving a used Arteon, listen for creaking or ticking sounds when turning into a steep driveway or traversing rough pavement at low speeds. Some drivers suspect this is the sound of the frameless door glass rubbing against the weatherstripping, while others say they think it’s coming from the front suspension.

Here are two more noise-related discussions, one about rattles from the Arteon’s doors and another on clunking sounds from the front suspension.

We recommend paying close attention to the Arteon’s transmission performance, watching for rough shifting. Then find a safe place to stop and run the infotainment system through its various menus and functions. Finally, make sure all of the car’s power-operated features work and that the climate-control system responds as it should to its controls.

If you like to do your own vehicle maintenance, here’s a how-to for changing the Arteon’s engine oil.

In 2018, Buick rolled out the final generation of its Regal with a redesign that turned it from a compact sedan into a hatchback. Base models had front-wheel drive and a 2.0L turbo four-cylinder engine (250 hp/260 lb-ft) with a nine-speed transmission. An optional all-wheel drive system came with a torque upgrade to 295 lb-ft. Also available was a 3.6L V6 (310 hp/282 lb-ft) that came standard with AWD.

If you search for Regal information online, you will see references to a version called the TourX, which is a station wagon that was sold in the U.S., but not in Canada.

Here’s a discussion about complaints about vibrations felt at highway speeds and their possible causes.

In this thread, owners puzzle over why Regal batteries die for apparently no reason. Battery issues are common in many modern cars with complicated electrical systems; a run-down battery can have enough juice to start the car but cause weird issues when the car is running.

Here are a couple of discussions about an air-conditioning refrigerant line that can spring a leak, causing the A/C to fail. The leak happens because the A/C line is poorly routed and rubs on the engine.

In this discussion, Regal owners toss around possible causes for front suspension noise in their cars.

Buick recommends that Regal drivers use premium-grade fuel (though it will run fine on regular too) in their cars – and most do, according to this poll. Whether you use premium or regular, we recommend you fill up with high-quality “top-tier” gasoline: direct-injected engines like those in the Regal are prone to intake deposits that can build up over time and cause performance problems, but using good fuel can help mitigate that. During your test drive, park the car and explore the Regal’s infotainment system to make sure all of its functions work. If the car has navigation, the map should load quickly. Turn the car off and on again a few times to restart the infotainment interface, to make sure it loads properly and that the navigation and audio system work as advertised every time. A few Regal owners complain of unpredictable system performance, with one saying it’s like the system is “haunted.”