Car Reviews and Tips » Looking for a Manual Transmission? 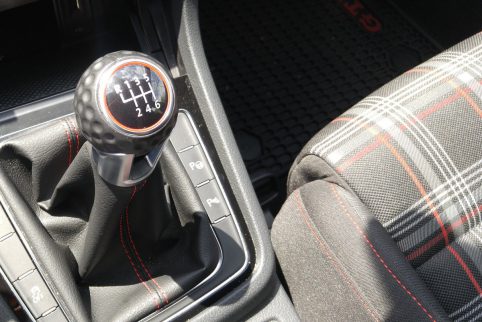 Among the notable recent trends in the auto industry is a shift away from manual transmissions to automatics. These transmissions used to be more expensive and less fuel-efficient than manuals and often hampered performance. But today’s automatics, with anywhere from 6 to 10 ratios, are generally more efficient than stickshifts and perform much better than the three-, four- and five-speed autos of the past.

But the manual transmission has not gone away completely. Some manufacturers offer them in economy cars to keep base prices down, while others put them in sporty vehicles to appeal to driving enthusiasts.

Keep reading for a list of all the vehicles still available with a stickshift for the 2020 model year, presented alphabetically by manufacturer.

BMW sells two of its smallest models, the 2 and 4 Series, with a manual. That applies both to regular versions of the cars and the high-performance M2 and M4 variants.

Chevrolet is down to just two vehicles with a manual transmission, and they’re found at opposite ends of the performance spectrum: the Spark city car and the Camaro sports coupe. The latter is notable for offering a stickshift with all four of its engines: the V6 and turbocharged four-cylinder used in entry-level trims, and the two V8s that power the mighty SS and ZL1 variants. 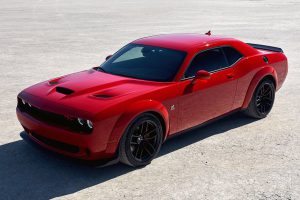 Dodge’s sole manual transmission is found in its Challenger muscle car. Unlike the Chevrolet Camaro, the Challenger limits its six-speed stick to two V8 models: the 375-hp R/T and the 485-hp Scat Pack package.

The only Fiat that comes with a stickshift anymore is also the only one not entirely designed by the Italian company. The 124 Spider roadster uses a Fiat drivetrain, but is built on the Mazda MX-5 platform.

Ford’s Mustang completes an American muscle-car trifecta with the Chevy Camaro and Dodge Challenger listed above. Like Chevrolet, Ford makes the Mustang available with a stickshift in most trims, including those using a 335-hp turbo four-cylinder, and 5.0L and 5.2L V8s with 460 and 526 hp respectively. Only the monstrous GT500 and its 760-hp engine comes with an automatic as standard.

In our introduction, we told you manual transmissions are now largely limited to sporty cars and entry-level models, and the Genesis G70 qualifies as both. It’s the luxury brand’s least-expensive model, but also its most performance-focused. The G70 can be had with a six-speed stick in 2.0T Sport RWD trim, which is also the only version of the car without standard all-wheel drive. 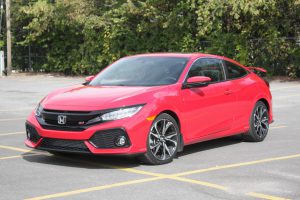 Honda sells three of its car models with a manual transmission.

All three versions of the Honda Civic (sedan, hatchback and coupe) are also available with a six-speed stick. Depending on body style and trim, the manual comes with both the entry-level 1.8L engine and the more powerful 1.5L turbo motor, which is used in the Civic Si coupe pictured.

Next up is the subcompact Fit hatchback, whose six-speed comes with a 1.5L engine.

Finally, the Honda Accord is the only mid-size/family sedan in the marketplace with a manual transmission. It’s limited to the car’s Sport trim, but you can get it with either the 1.5L or 2.0L turbo four-cylinder engines.

Hyundai’s most entertaining manual transmission model is arguably the Veloster, whose stickshift is limited to cars with turbocharged engines: a 1.6L in the regular-grade Veloster, and a 2.0L in the Veloster N hot hatch.

Hyundai’s Venue is the first crossover on our list of stickshift vehicles. This subcompact utility uses a manual in its most basic Essential trim, which is also Canada’s least-expensive SUV.

The same 1.6L/six-speed combo used in the Venue can also be had in the Hyundai Accent subcompact car.

The Elantra sedan and GT hatchback models both offer a stickshift, with either its entry-level 2.0L engine or the 1.6L turbo that powers the entertaining Sport sedan and N Line GT hatch models.

Kia’s stickshift offerings begin with the Rio subcompact. Kia’s family ties to Hyundai mean the Rio uses the same 1.6L engine as the Accent and Venue.

If the Rio is too small for you, move one rung up the ladder to the Forte, Kia’s compact sedan, which offers a six-speed manual transmission in its entry-grade LX trim. You’re out of luck if you’re shopping for the Forte5 hatchback, though; it’s only available with automatic transmissions. 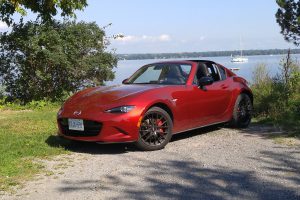 The Mazda MX-5 roadster is exactly the kind of car in which you’d expect to find a manual transmission. In our opinion, it’s one of the best in the industry, with a satisfyingly mechanical shift feel and gear ratios nicely matched to the car’s high-revving engine.

Mazda’s thriftiest manual-transmission model is the Mazda3 compact sedan and hatchback. In the sedan, the six-speed stick comes only with the base 2.0L engine, but the Mazda3 Sport hatch offers manual shifting with both its 2.0L and 2.5L engines.

The subcompact CX-3 crossover also mates its 2.0L engine with a six-speed manual, but only with front-wheel drive.

Mini gets a special mention here because, while the brand’s 2020 lineup uses automatics exclusively, the company announced in mid-April that it would re-introduce manual transmissions for some of its 2021 models.

The 2020 Mitsubishi Mirage falls squarely in the group of cars offering a manual transmission to keep costs low: so equipped, its entry trim sells for $12,298. The Mirage is also the only car left with a five-speed manual; all other stickshift cars use six-speed gearboxes.

At the performance end of Nissan’s stickshift spectrum is the 370Z sports car, whose big 3.7L V6 sends power to the rear wheels through a six-speed with a fun rev-matching downshift function.

Nissan completely redesigned its Sentra compact sedan for 2020, but kept a manual transmission for its base S trim level, in which the six-speed teams up with the car’s 2.0L, 149-hp engine. 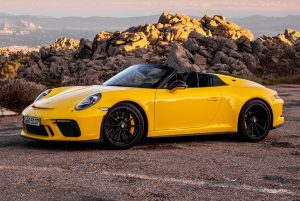 Porsche’s flagship manual-transmission model is the 911, unique for being the industry’s only seven-speed manual-shift model. You can’t get it in the base model, but it does come standard in the more powerful Carrera S and 911 GTS models. The $300,000-plus 911 Speedster and the track-ready GT3 variants trade the seven-speed for a six-speed stick.

If you think the manual transmission is in short supply generally, there is even less selection for drivers who want to combine one with all-wheel drive. Of the limited number of vehicles that drive four wheels through a stickshift, Subaru sells three of them.

If you want excitement in a small, AWD Subaru, the 268-hp WRX and 310-hp WRX STI models both come standard with a manual transmission.

Subaru’s outlier is the sharp-handling BRZ sports coupe, whose six-speed manual powers the rear wheels only. 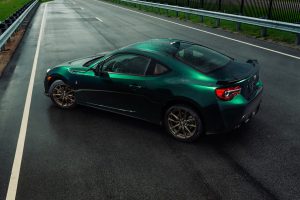 The Toyota 86 is mechanically identical to the Subaru BRZ and likewise offers a six-speed stick.

Toyota’s other two manual transmission cars live at the economical end of its lineup. One is the Yaris hatchback (which is engineered by Mazda), and the other is the Corolla, which comes in sedan and hatchback variants.

All of Volkswagen’s stickshift offerings are found in its compact Golf hatchback and Jetta sedan models. Thankfully for enthusiasts, that selection includes the sporty Golf GTI and Jetta GLI variants with their shared 228-hp engine, offered alongside the 147-hp entry-level versions. GTI drivers are treated to a neat golf ball-inspired shifter.