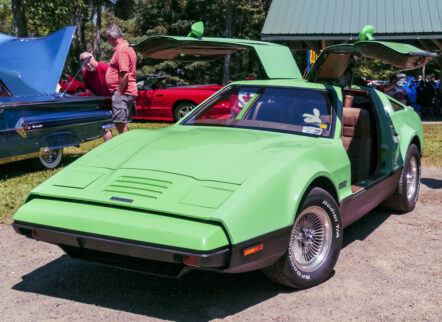 Even car un-enthusiasts will recognize gullwing doors: they’re what made the DeLorean in the Back to the Future movie trilogy look so hot. So, why don’t we see more of them? In this blog post, we’ll cover some iconic gullwing-door cars and explain why the design isn’t as useful as it is cool.

What Are Gullwing Doors?

Gullwing doors look like birds’ wings: they hinge on the roof and open upwards. They developed from butterfly doors, which open upwards but are still hinged to the car at the front. Car-design genius Jean Bugatti developed them for the 1939 Type 64. Gullwing doors first appeared on the Mercedes-Benz 200SL race car just over 10 years later, in 1952, and were introduced to the vehicle’s road-legal version in 1954.

Arguably, no style of door looks more beautiful on a car than gullwing doors. They also require less space for clearance, making it easier to step in and out of your vehicle in a tight spot. However, they come with important issues that make them too difficult to implement across the board.

For starters, gullwing doors must be lighter than standard doors because they are being lifted against gravity. This can cause design problems in safety features, and t-bone crashes, already very dangerous, become more so.

The next problem is water, in any form. Designers and engineers have had difficulties over the decades to protect a vehicle’s interior under stormy conditions. Who wants to ride in their cherished DeLorean, or even in the Canadian-built Bricklin SV-1, while getting dripped on?

Third, because gullwing doors require power assist to open (they’re heavy, even when they’re light), a car now has more parts that can break down and require repairs.

And lastly, if you’re the wrong height, they can be a pain to close.

But despite all those concerns, a few iconic cars have emerged over the years with gullwing doors.

What Gen-Xer doesn’t recognize this car? Although the DeLoreans for sale today don’t have a true flux capacitor installed, so time travel isn’t possible yet, they come with nostalgia and coolness.

But if you want to own just the car, search for auto shops dedicated to repairing DeLoreans. They are far and few between, but they do exist and can help keep your car in shape. Wells Auto in Milton is a Canadian one that repairs and sells DeLoreans.

The Canadian sports car that couldn’t. That about sums up the history of this gullwing-doored vehicle that was built in New Brunswick. Manufacturing the vehicle lasted only a couple of years and ceased in 1975.

However, the car was known for a few things besides its doors. The letters SV actually stand for “safety vehicle.” It included a welded roll cage and bumpers that absorbed impact. Back then, those features were innovative. Today, they’re standard.

But everything from the body falling off a test vehicle thanks to the heat in the Arizona desert to gullwing doors that took six seconds to open and again to close (and let the rain pour in in the meantime) meant nothing could really go right for this car.

The factory made only about 1,500 cars before it was shut down.

Did Tesla get it right? Judging by online reviews, they’re getting closer. Gullwing doors only exist for the back doors of the Tesla Model X. The front doors are standard doors, suggesting the company knows gullwing doors aren’t 100% effective yet. (The company also calls them falcon-wing doors, because they have a second hinge in the middle. This means they take up even less space than regular gullwing doors when opening, but it’s one more component that can malfunction.)

However, a used Tesla Model X could actually cost you less than a replica of the DeLorean time machine, and it’s ultra-modern. Something to consider.

Gullwing Doors: Nice to Look At

They do look futuristic, save space, and can make getting into and out of a vehicle easier, but gullwing doors come with too many design flaws to become standard, at least in our time.