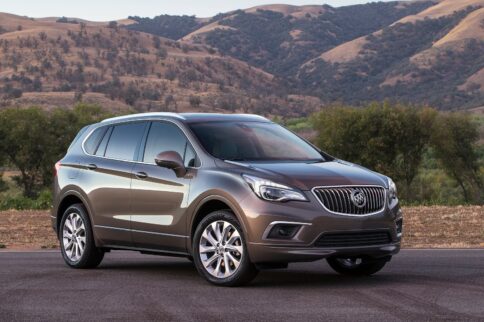 These days, few vehicle segments are more competitive than the compact luxury crossover SUV class. These models are popular for combining refinement, performance and practicality with accessible prices.

The dominant entries come from European and Japanese brands, while North America’s luxury automakers are more recent converts. And all of those companies now face competition from the Genesis GV70, a new-for-2022 model from South Korea.

Because this is a large segment with 15 models to choose from, we’re going to split up our used vehicle buyer’s guide into a series of articles based on each model’s country of origin, starting with the category’s three domestic models.

Cadillac has competed in this category since 2010, when it redesigned its second-generation SRX from a mid-size to a compact. It was replaced in 2017 by the XT5, which arrived after Lincoln and Buick introduced their MKC and Envision models in 2015 and 2016, respectively.

In future articles, we’ll look at the compact luxury SUVs that come from Japan and Korea, Germany, and the rest of Europe. For now, if you’re keen on owning a small upscale crossover from a domestic automaker, read on to learn what to look for during your test drive.

At its 2017 introduction, the XT5 was one of two Cadillac SUV models, the other being the full-size Escalade. Since then, the XT5 has been bracketed by the subcompact XT4 and the mid-size XT6.

Cadillac designed the XT5 with a couple of fuel-saving features. One is an auto stop-start system that turns the engine off at stoplights, and V6-powered cars can run on four cylinders at cruising speeds. Both systems have generated complaints among drivers, but mostly among those unaccustomed to them. During your test drive, make sure both features work properly. The stop-start setup should kill the engine as soon as you come to a stop, and it should restart immediately as you lift off the brake. When the V6 switches to four-cylinder mode, you may notice a subtle vibration. If it seems excessive, the underlying cause could be a broken transmission mount. You can verify the switch from six to four cylinders with an indicator in the gauge cluster.

During your test drive, pop the XT5’s hood and look for engine oil leaks, and have your mechanic do the same during a pre-purchase inspection. Don’t ignore an oil leak, as some reliability issues in modern GM engines are related to low oil levels and not-frequent-enough oil changes.

Speaking of oil changes, the XT5 has an oil life monitor that will tell you when it’s time for maintenance. Ignoring these alerts can void any warranty coverage your used XT5 came with.

The Cadillac XT5 has an electronic shift lever that some owners have had replaced after the transmission failed to engage and/or generated error codes. Starting from the park setting, shift into drive and reverse several times to make sure the shifter works properly. Shifting into park involves pushing a button on the top of the shifter, but the car will also do it automatically when you turn the engine off.

The XT5 also has an electronic parking brake that has caused some owners grief. When you apply and release the brake, you should hear a brief whirring sound from the brake’s electric actuators. A parking brake malfunction will usually come with a warning message in the gauge display.

Other common XT5 complaints are foul-smelling A/C caused by moisture in the system and a tailgate that rattles when driving over rough pavement.

At its 2016 introduction, the Buick Envision was significantly larger than the entry-level Encore, and closer in size to the mid-size Enclave, although without that model’s third-row seats.

If you go Envision shopping, you’ll find the more affordable versions will have a 2.5L four-cylinder engine (197 hp/192 lb-ft of torque) while uplevel models have a 2.0L turbo four-cylinder (252 hp/260 lb-ft). Through 2018, a six-speed automatic transmission was included with both engines, but Buick upgraded turbo models to a nine-speed in 2019. Front- and all-wheel drive were offered from the factory.

The 2.5L engine’s timing chain can wear out prematurely if you are lax about regular maintenance like oil changes. That issue will be made worse if the engine oil level runs low.

The turbo engine will also be at its best with regular oil changes. One thing to watch for is oil pooling in the intake piping, which can indicate failing turbocharger oil seals. The Envision’s turbo engine and its direct fuel injection system is also prone to carbon buildup on the intake valves. Those deposits need to be cleaned off at regular intervals to prevent engine performance problems.

The Envision has a fuel-saving automatic start-stop system that shuts the engine off at stoplights and restarts it again when you take your foot off the brake. Make sure it works, especially when it’s time to drive away; a weak battery and/or software issues can cause it to malfunction.

Some Envision models have three-zone A/C with separate controls for the rear seat. A common issue with this setup is rear vents that don’t respond to the HVAC settings. General Motors is aware of this problem, and in 2019 released a service bulletin to help Buick dealer technicians fix it. When test-driving a used Envision, run the HVAC system through all its settings in both manual and automatic modes to make sure it responds properly.

Envision owners also complain of infotainment faults like a touchscreen that freezes up or goes blank. Other owners wish the touchscreen was more responsive. Again, run this system through all its functions during your test drive to make sure it works properly. Some problems can be fixed with software updates, but if the only fix is to replace hardware, this will be more expensive.

When test-driving a used Envision, pay attention for any loud clunking or knocking sounds from the suspension and steering, which can indicate worn parts that need to be replaced.

Some Envision drivers complain of wind noise from the sunroof and front windows at highway speeds. Others say their cars have thin paint that chips easily, which could be the cause of rust spots appearing after just a few years on the road.

The Buick Envision has automatic headlights that use an ambient light sensor to decide when to turn them on and off. Some owners find the sensor is too sensitive and, because the dashboard displays dim when the headlights come on, this can effectively make the infotainment screen illegible in daylight.

When the 2015 Lincoln MKC arrived, it joined a range of well-established utility models that included the mid-size MKX and MKT crossovers and the full-size Navigator SUV.

In 2015, MKC buyers could choose from 2.0L and 2.3L turbocharged four-cylinder engines (240 hp/270 lb-ft and 285 hp/305 lb-ft, respectively). Both came with a six-speed automatic transmission and standard AWD. Aside from a small power increase for both engines in 2017, the MKC’s specs remained the same through 2019, when it was replaced by the Corsair.

Many MKC owner complaints have to do with the car’s infotainment touchscreen system. Some say the screen freezes or goes blank, that the system doesn’t recognize voice commands, or the navigation system is inaccurate. In other cases, the satellite radio frequently drops the signal. The same central screen is also where the backup camera displays its image, and some drivers say it only works intermittently.

Some MKC owners complain of engine oil leaks that mostly seem to originate at the turbocharger, but others say they’ve seen oil leaking from other parts of the engine. If you notice fluid leaks of any kind during your test drive, have your mechanic follow up during a pre-purchase inspection.

The MKC’s transmission generates complaints for rough shifting and slipping between gears. In some cases, a software update will correct this, but other owners had to replace transmission control sensors and solenoids. Another shifting quirk may require replacing the torque converter, the component that connects the engine to the transmission. However, it’s important to note that serious MKC transmission problems are rare, especially in well-maintained cars.

When new, all MKC models came with heated seats, with ventilation as an option. Make sure they work: Some owners say pressing the heat button activates ventilation and vice-versa, while others complained the heaters didn’t work at all.

Take the MKC out on the highway and listen for wind noise from around the front doors and sunroof. When parked, feel around for moisture in the carpet; water leaks are not extremely common, but can be the result of a blocked sunroof drain tube.

Check that the power tailgate opens and closes reliably. Some owners say the door will continuously lock and unlock after it’s closed, which drains the battery when the car is parked.

If the MKC’s air conditioner blows warm air instead of cold out of any of the dashboard vents, the HVAC system’s “blend” door may be faulty. Run the A/C through all settings to make sure it blows the right temperature of air out of the vents you select.

While you have the hood open to look for oil leaks, note the age of the battery. If it’s a few years old, consider replacing it even if it has no problem starting the engine, as a weak battery can cause issues with the car’s various electronic systems.