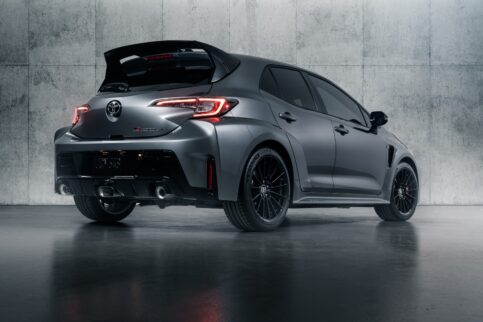 Along with the beginning of spring, March 2022 brought with it news of a new hot hatch from a surprising source, the revival of a classic van with all-electric power, and the first-ever SUV model from a British brand known for super-lightweight sports cars.

Toyota’s newest sporty offering will be a 300-hp, AWD version of its Corolla hatchback. Volkswagen says it will bring the ID Buzz, an all-electric update of its classic Microbus van, to North America in 2024. And Lotus says its first-ever SUV will be the battery-powered Eletre, set to go on sale next year.

Meanwhile, Stellantis has revealed specifications for a new turbocharged six-cylinder engine that will power some Jeep and Ram models starting later this year, Kia has launched a redesigned version of its Sportage crossover, and Ford has a new budget-oriented off-road package for its popular F-150 pickup.

Later this year, Toyota will begin selling the GR Corolla, a rally-inspired version of its compact hatchback that will compete for hot-hatch market share with the Honda Civic Type R, Volkswagen Golf R, and Hyundai Veloster N.

When it arrives in showrooms, the Toyota GR Corolla (GR being short for Gazoo Racing, the brand’s motorsports division) will become one of the company’s sportiest offerings, thanks to its turbo motor, track-ready chassis, and an AWD system with three driver-selectable torque distribution settings.

The GR Corolla’s engine makes its 300 hp and 273 lb-ft of torque using a combination of port and direct fuel injection and a low-restriction triple exhaust system. Meanwhile, the AWD system can be set to split torque 60:40, 30:70, or 50:50 between the front and rear axles – both of which will be fitted with mechanical limited-slip differentials. The sole transmission will be a six-speed manual with automatic downshift rev-matching.

To accommodate the GR Corolla’s 235-mm-wide tires, Toyota fits the car with flared fenders that also help distinguish the GR from lesser versions of the Corolla hatchback. Underneath the body, the GR’s structure has been reinforced and the suspension tweaked to suit the car’s high-performance mission.

Toyota says the GR Corolla will also be the first version of the popular compact car to get the brand’s new infotainment system as introduced in the redesigned Tundra pickup.

At launch, the GR Corolla will come in Core and Circuit Edition configurations, the latter exclusive to the 2023 model year. Toyota says it will reveal GR Corolla pricing prior to the car’s arrival later this year.

This spring, Kia will begin selling its all-new 2023 Sportage, the fifth generation of the brand’s compact crossover model, starting at $28,395.

The Sportage’s first redesign since 2017 brings adventurous styling that draws subtle inspiration from the brand’s edgy EV6 all-electric crossover wagon. It’s bigger, too, measuring 175 mm (almost 7.0 inches) longer than the outgoing Sportage, and riding on a wheelbase stretched by 85 mm (about 3.3 inches).

At launch, the sole engine will be a 2.5L four cylinder that will feed 187 hp and 178 lb-ft of torque to an eight-speed transmission. All-wheel drive will be standard in all trims except the base LX, which starts out with front-wheel drive.

Later in the 2023 model year, Kia will add hybrid powertrain options built around a 1.6L four-cylinder engine: a conventional hybrid will make 227 hp, and a plug-in hybrid (PHEV) variant will boast 261 hp. Kia has yet to publish fuel and energy consumption estimates for the new Sportage, but the PHEV should promise about 50 km of all-electric driving range, similar to that offered in the Hyundai Tucson PHEV, with which the Sportage PHEV will share its powertrain.

Initially, Sportage pricing will top out at $40,995 for the X-Line Limited package. Kia will announce pricing for hybrid models closer to their arrival in Canada.

Volkswagen says it will bring a production version of its retro-cool ID Buzz electric van to North America in 2024 following its introduction later this year in the European market.

That North American showroom debut will come about seven years after VW unveiled a concept version of the van at the 2017 Detroit auto show.

When the ID Buzz goes on sale in Europe this year, it will be powered by an 82-kWh battery providing 201 hp and 229 lb-ft of torque to the rear wheels, a powertrain similar to the one used in the ID.4 electric crossover that came to Canada in 2021 (and with which the ID Buzz shares its modular platform). That makes it a likely candidate as a power source for the North American model, but VW hasn’t confirmed that. VW says more ID Buzz powertrain choices will follow, but didn’t specify how many would come here. The ID.4’s optional setup is a dual-motor, AWD setup with 295 hp.

What VW has told us is that the ID Buzz that comes here will be a long-wheelbase version of the van sold in Europe.

We expect North American ID Buzz models will use the same recycled cabin materials as promised in the continental version, including on the seats, for example, which will not be offered with traditional leather upholstery.

Ford is making it less expensive for F-150 buyers to take their trucks off-road with a new Rattler option package for the 2023 model year.

As we write this, Ford hasn’t announced pricing for the Rattler package, but says it will become available this fall. In 2022, Ford offers the F-150 XL trim in the truck’s regular, SuperCab, and SuperCrew configurations, at starting prices ranging from $35,795 to $45,170.

The upscale SUV marketplace, already bursting at the seams, is about to get a little bigger: Maserati is readying an all-new Grecale compact crossover for sale later this year and, in something of a hell-freezes-over moment, Britain’s Lotus has announced it will roll out its first-ever SUV, called the Eletre, in 2023.

While Maserati is already established in the SUV segment with the mid-size Levante, the smaller Grecale should expand the Italian brand’s appeal with a lower price point.

To start, the Grecale will use turbocharged four-cylinder and V6 engines making 296 and 523 hp, respectively. The latter will help the Grecale bang off a claimed 3.6-second sprint from 0-100 km/h. In more practical terms, Maserati also promises best-in-class interior space, dual infotainment displays, and leather upholstery.

Next year, Maserati will follow up with a battery-electric Grecale variant dubbed Folgore (Italian for lightning), but hasn’t revealed many details yet.

Meanwhile, Lotus is jumping straight into the battery-electric segment with the Eletre, its first-ever crossover model. The British sportscar maker says the Eletre will have a 100-kWh battery powering three motors, whose combined 600 hp will jolt the car from 0-100 km/h in less than three seconds. Lotus is also aiming for 600 km of driving range on the European testing cycle, but that figure will be lower in North America, thanks to the less-optimistic rating system used by Canadian and American regulators.

Lotus is legendary for its fixation on lightweight vehicles. The company says its goal for the Eletre is a weight of 2,000 kg (about 4,400 lb); for comparison, the Nissan Leaf compact electric hatchback weighs a little more than 1,600 kg.

The Lotus Eletre will be built in China, and should hit highways there and in Europe next year. The company hasn’t said when the Eletre will reach North America.

Stellantis, the parent company behind the Jeep and Ram brands, revealed details in March of a new turbocharged inline six-cylinder engine that will be used in future full-size truck and SUV models.

The 3.0L engine, dubbed Hurricane, will use twin turbos to generate more than 400 hp and 450 lb-ft of torque in a standard output configuration, out-powering the 5.7L V8 currently available in the Ram 1500 pickup and Jeep’s Grand Cherokee and Wagoneer SUVs.

A high-output version of the Hurricane six-cylinder will crank out upwards of 500 hp/475 lb-ft, making it a likely substitute for the 6.4L V8 that comes standard in today’s Jeep Grand Wagoneer.

The engine’s goal, said Stellantis, is to reduce fuel consumption and carbon emissions compared to the Jeep and Ram V8s without sacrificing towing performance. The company said the 3.0L Hurricane engine will become the “primary” engine for its large truck and SUV models, but stopped short of saying it will replace the company’s V8s altogether.

Stellantis didn’t say which of its vehicles will get the 3.0L Hurricane treatment first, but confirmed that the engine will be on sale by the end of 2022.