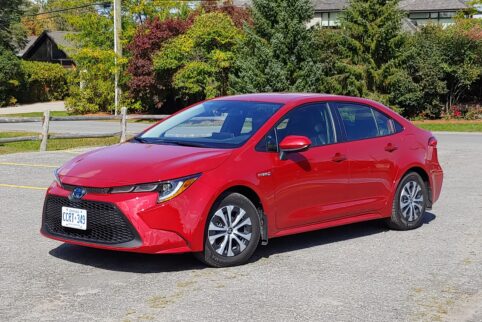 Toyota is an industry leader in gas-electric hybrid technology, and the Corolla is a household name known for its already impressive fuel economy. You’d think combining the two would be a no-brainer, and yet Toyota launched the first-ever Corolla Hybrid just last year as part of the compact sedan’s redesigned 12th generation.

The latest Corolla uses a new platform conceived to deliver a more entertaining drive. But, realistically speaking, Toyota doesn’t design its hybrids to be fun. The idea is to save fuel, and on that count, the Corolla Hybrid succeeds.

Toyota makes a Corolla hatchback too, but it doesn’t offer a hybrid option.

For its second year on the market, the Corolla Hybrid adds standard Android Auto smartphone connectivity, which joins the Apple CarPlay system that was included last year. All models also get rear cross-traffic alert as standard.

The Corolla Hybrid borrows its powertrain from the Prius. As in that car, a 1.8L gas engine and electric motor make 121 hp, the lowest horsepower rating for any Corolla model. Still, performance is adequate thanks to the electric motor’s low-end torque.

The transition from all-electric to hybrid power is nearly seamless. Like Toyota’s other non-plug-in hybrids, the Corolla will only drive on battery power alone at low speeds and while cruising on light throttle.

You can press an EV mode button ahead of the shifter to force the Corolla Hybrid to run on electricity alone, but this only works in specific conditions: The battery has to be well-charged and requires you to be gentle with the throttle. If you ask for too much acceleration, the gas engine will come back on.

Unfortunately, what stood out most to me about the Corolla’s drive is its brake feel. The transition between the friction and regenerative braking systems is very obvious, especially as the car is slowing to a stop and the friction brakes take over. The brakes are also grabby at low speeds, making it hard to bring the car smoothly to a stop.

Front-seat headroom is good, especially because Toyota doesn’t offer a space-eating sunroof in the Corolla Hybrid.

There’s a lot less headroom in the rear seat, and legroom is not great, either. It’s also easy to hit your head on the top of the rear door opening when getting in and out.

On the plus side, the Corolla Hybrid has removable rear-seat headrests, unlike a gas-powered 2020 Corolla SE I drove, whose fixed headrests got in the way of the rear view.

Unlike many older hybrid cars, the Corolla’s battery doesn’t intrude into the car’s trunk, so you get the same cargo capacity and split-folding rear seat as in any Corolla sedan.

The Corolla Hybrid comes in a single trim with a starting price of $24,990, almost $6,000 more than the most basic gas-powered Corolla.

While the regular Corolla competes with a number of other compact sedans, the Corolla Hybrid has fewer direct competitors.

The Honda Insight is a Civic-based hybrid sedan that starts at $28,490, with that higher price justified by its posher look and driving feel.

Hyundai’s Ioniq is a compact hybrid hatchback whose entry price is $25,399. It also comes in plug-in hybrid and full electric versions that command higher prices.

The Corolla Hybrid will soon face another comer in the redesigned 2021 Hyundai Elantra, which will include that model’s first-ever hybrid option.

The addition of a hybrid powertrain doesn’t fix the Corolla’s practical shortcomings, the main one being its tight rear seat. It also, unfortunately, includes the poor brake feel endemic to Toyota’s hybrid regenerative braking system.

However, the Corolla Hybrid doubles on down on fuel economy in a car already known for thrifty running, in my case achieving the rare feat of besting Toyota’s estimates in real-world driving. If you’re a fan of the Prius’s thrifty powertrain but wish you could get it without that car’s weird styling, the Corolla Hybrid could be your answer.