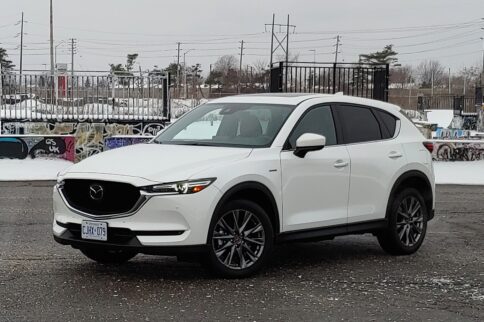 Mazda has officially been in business in Canada since 1968, but the Japanese company is much older than that, tracing its roots to its founding in Hiroshima in 1920. So this year the brand is celebrating its centennial with a series of special editions, including this one, the 2021 Mazda CX-5 100th Anniversary Edition.

Mazda’s CX-5 100th package gets the Signature’s turbocharged engine and long list of features, and adds red Nappa leather and special badging. Beyond commemorating the anniversary, this new package drives home how serious Mazda is about moving its brand upscale and making its vehicles stand out.

Mazda’s 2.5L turbo four-cylinder engine is a strong performer, with 250 hp and 310 lb-ft of torque. However, if you’re expecting acceleration feel, you may come away disappointed. Mazda’s turbo makes the bulk of its power at low revs, so while the CX-5 100th is quick when driving away from a stop, its acceleration feels less impressive in highway passing maneuvers. But a CX-5 with the turbo engine is not slow—it just doesn’t feel as fast as it is.

Like all CX-5 models, the 100th is fun to drive with its sharp handling and tight ride, which make it feel more like an expensive European vehicle than a mass-market model. Our only complaint is that the suspension is a bit firm on imperfect pavement, but some of that is due to the 19-inch wheels and low-profile tires the 100th rides on. A mid-level GS model (which you can’t get with the turbo motor) has 17-inch wheels and tires with taller sidewalls, which improve the CX-5’s ride quality a little bit.

You’ll find little to complain about in terms of comfort or space in the CX-5’s front seats. The most noticeable design quirk is that the climate controls are low on the dash, forcing you to look away from the road to make adjustments beyond twisting the temperature dial.

Mazda’s 8.0-inch infotainment display is touch-sensitive, but the system is designed to be used primarily with the dial on the console, which we think is better.

Where the CX-5 loses the most points against its direct competitors—think vehicles like the Honda CR-V, Toyota RAV4, and Ford Escape—is in its snug rear seat. Some compact cars have more legroom than the CX-5, and there’s not enough here to make this Mazda truly comfortable for four adults.

The red Nappa leather seating that’s standard in the CX-5 100th is an especially nice upscale touch, but it made my tester vehicle’s off-white door and console trim look out of place.

None of the CX-5’s trim levels will make you feel like you’ve settled for less vehicle than you wanted, even at the base GX’s $28,500 price tag. And while the CX-5 100th commands a $15,000 premium, what you get for that money turns this normally modest crossover into a true luxury vehicle.

All that makes the CX-5 100th a bargain compared to similarly sized vehicles from BMW, Mercedes-Benz, and Volvo. Even Acura and Lexus—luxury brands known for strong value—can’t compete with their RDX and NX models, whose starting prices are both about $1,000 more than that of the fully equipped CX-5 100th.

For all the features Mazda crams into the CX-5 100th, wireless smartphone charging is not one of them, and it’s a conspicuous item to leave out, given the CX-5’s otherwise technologically up-to-date cabin.

The Mazda CX-5 100th illustrates the company’s wisdom in shifting its attention upmarket, where it may lure buyers away from luxury brand showrooms with this high-value package.

Mazda’s problem is that in focusing on making the CX-5 a fun-driving vehicle with upscale aspirations, it has forgotten that it also needs to compete with its direct rivals in the compact crossover class. The CX-5 is not a lot smaller than key rivals like the Honda CR-V and Toyota RAV4, but those models make more efficient use of their interior space than the Mazda does, and that’s important in this segment.

Ultimately, the Mazda CX-5 100th stands out—just not always for the right reasons.