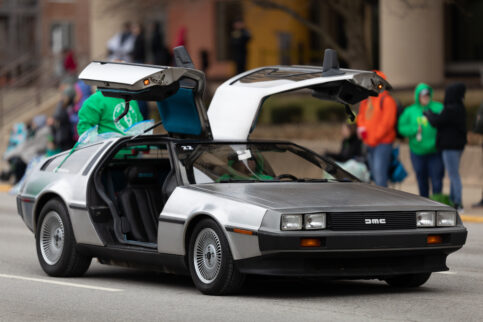 “I’m cuckoo for Cocoa Puffs” is perhaps not the first thing that comes to mind when you think “auto show,” but it might be when you enter the main room of the Oblivion III 80s and 90s Car & Culture Show, taking place just 30 minutes outside of Toronto on September 12th. This show, as its name implies, celebrates not only the cars that make the 80s and 90s, but also the culture.

For today’s adults who grew up in the 1980s and 1990s, quoting these cereal commercials is second nature, because these commercials played so frequently between scenes of Knight Rider and other TV shows. But they make up only a small part of the Oblivion show.

What cars do you think of first in these decades? We’d guess K.I.T.T. and Doc Brown’s time machine, and replicas of those vehicles will be there.

Sadly, you won’t be able to travel back in time to stop yourself from buying your significant other the wrong gift. Nor can you jettison through the sunroof that relative who always manages to disguise an insult as a compliment at the dinner table.

But seeing those iconic cars will at least let you have those dreams again.

However, those are only two from the 160 cars expected at the Oblivion car show car show this year.

In fact, the intent behind the show is nostalgia, so Sookraj and his team prefer cars maintained as close to stock as possible.

What cars can you expect in 2021? Sookraj gave us a peek:

Sookraj says they prefer cars that were available in Canada. So chances are good you’ll see a car your family or friends drove.

The History of the Oblivion Car Show

The Oblivion car show focuses on all the forgotten—and a few memorable—cars from the 1980s and 1990s. Although you’ll find car lovers here, you don’t have to be one to enjoy yourself.

“People reached out to us and said they needed this,” says Sookraj. As the owner of Wells Auto in Milton, the only DeLorean repair shop in Canada, he’s an obvious recipient of that kind of feedback. But it took several years before the first show opened in 2018.

Discussions began in 2015, with the first sponsor on board in 2016. The Oblivion team booked their first venue in 2017 and opened their doors to their first show in 2018. In 2019, they’d already expanded to Ontario Place.

Because of the events of 2020, the actual show was cancelled. However, in February of that year, the team secured a place at the Canadian International AutoShow, complete with arcade, and yes, cereal boxes any grown kid from the 80s would remember.

“Finding the right spot happened when I drove by this place on my way to work,” Sookraj says. “This is it. This is Camp Oblivion.”

The location for this year’s 80s & 90s car show is, appropriately, a camp reminiscent of the camps many Gen-Xers and early Millennials would have attended either through school or in the summer. Although COVID sadly closed the camp, which had been running non-stop since 1930, it allowed for this special, one-time-only location.

The Sugary Sweetness of Nostalgia

“The first cereal slogan that comes to my mind is,” says Sookraj, “‘Can’t get enough of that Sugar Crisp.’”

We can’t get enough of the 80s and 90s, and Sookraj and his team can’t either. The main buildings of the camp will also house tones of 80s culture, including an 80s and 90s arcade and music.

And the return of the museum that celebrates the cereal brands that dominated the airwaves and our kitchens in the 80s.

Cars and the last two decades of the 20th century…so happy together.